09 | The Factory on Václavská Street

The Factory on Václavská Street. One of the factories of the firm Aron & Jacob Löw-Beer’s Söhne.

At 2 Václavská street, one of the family factories has survived. Although the buildings no longer serve their original purpose, the street façade, at least, is well preserved. This factory was founded in 1877 by Jacob’s son, Leopold Löw-Beer.

Jacob Löw-Beer left the Boskovice ghetto, and this rupture with the old way of life was symbolised in the fact that he gave a typically Austrian first name – Leopold – to one of his sons. Leopold’s brother Isaak turned the former paper mill in Brněnec into a profitable textile factory. Leopold himself, who owned a banking firm in Vienna and supported his brother financially, in 1877 bought a factory in Brno on Václavská street (originally Gebrüder Popper), which he incorporated into the family business. The subsequent generations modernised and enlarged the factory operations, and the last generation of the owners – Felix, Walter, August and Marie (Mitzi) Löw-Beer – continued on this same path. The family firm Aron & Jacob Löw-Beer’s Söhne employed 1,500 people; it had branches and trade representatives abroad and almost half of its production was exported throughout the world. During World War II, the Löw-Beer factories were occupied by the Nazis. The eldest son, Felix, had already died at this point, Walter had emigrated to England and August was in Scotland. Mitzi was murdered in 1940 in a concentration camp.

From their humble beginnings in the textile business back in the Boskovice ghetto to growing factories in and around Brněnec and Brno, Aron & Jacob Löw-Beer’s Söhne were the only European factory to uniquely master the full process from raw wool to finished fabrics. The factory was able to respond to changes that occurred under Austria-Hungary, managed the transition to democratic Czechoslovakia, and with severe difficulties survived World War II, only then to be nationalised by the communists. After the fall of communism in 1989, the factory lost its Russian markets, and was working only one day a week. František Olbert, the director at the time, travelled to Denmark, where he agreed a contract with a luxury furniture maker. For a while, the factory ran at full capacity again. Today, textiles are no longer produced at the factory, and the buildings are either deteriorating or have been converted for other purposes. 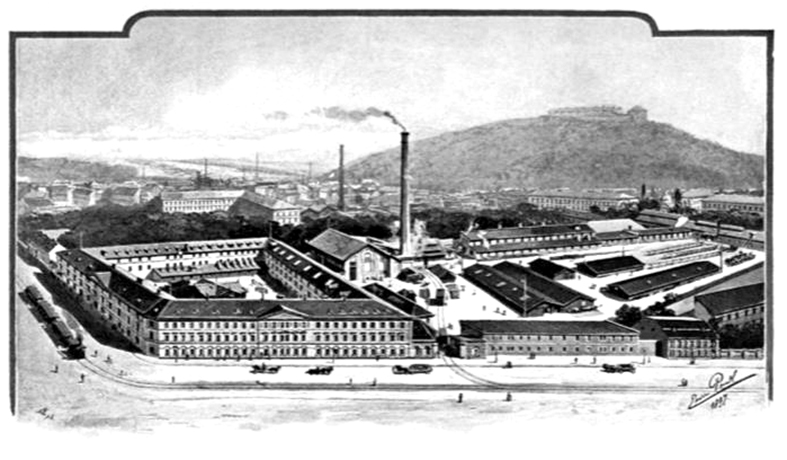 Photo: The factory on Václavská street in Brno in 1897. Photo from The Arks: The Löw-Beer Story Behind Schindler’s List and Villa Tugendhat.

What happened next in 1938? After the invasion of Czechoslovakia, my grandfather Walter Löw-Beer was standing on a line that had just cut Czechoslovakia in two, Europe in two, and the Jewish world into pieces. The new frontier created by the Munich Agreement in September 1938 ran along the stream in our factory in Brněnec. My grandfather, armed with his stick, stood face to face with the German soldiers on the other side of the bridge. He told them that he was in Czechoslovakia and they could go no further – a Jew defending his home country. Apparently, the Germans got down from their armed vehicles and fanned out along the banks of the stream. They asked my grandfather to cross the bridge to discuss what to do. If Walter Löw-Beer had crossed, he would have been sent to a concentration camp. Walter stood his ground, protected by the stream and his stick, and told the soldiers to phone Prague or Berlin to check their borders and orders, which apparently they did. This was how Walter Löw-Beer held up the Nazi invasion of that part of Czechoslovakia for three days. My grandmother, Alice Löw-Beer, was proud of that story. At the end of it, she would look up quizzically in silence. It was as if she was asking the heavens: if Walter could, why couldn’t others, with more means and power than his stick.

I often wondered what my grandfather was defending that day. He was a Czech nationalist, spoke Czech, German, French and English and was Jewish. My grandfather was European and refused to be split into pieces. But still, the uprooting from his home and culture was extreme. He left behind his home, some of his family, this unique culture in Moravia; he left a part of himself behind. Yet the survival of the Jews and my family depended on these family arks, which set sail from near Brno, and landed throughout the world. The Low-Beers now live throughout the world, wherever their arks landed in Brazil, Canada, America, Australia, Britain, the Caribbean and Switzerland. None survived in Czechoslovakia.