07 | Hlinky in the Heart of Europe

Hlinky in the Heart of Europe. The three brothers Felix, August and Walter Löw-Beer lived in Hlinky, but they did business around the world.

During the 1920s and 1930s, Brno, one of the biggest industrial and administrative centres of the newly-created Czechoslovakia, experienced an unprecedented boom. Brothers Felix, August and Walter Löw-Beer were caught up right in the middle of it all. They did business together, operating one of the largest textile factories in Europe, participated in social life and improved their private family residencies. Their family homes on Hlinky (numbers 86, 104 and 132) were located very close to the newly built, prestigious Brno Exhibition Centre. The modern avant-garde functionalist spirit of the exhibition pavilions and expositions coincided with the new identity of the young state, which ranked among the most developed countries in the world. The Brno Exhibition Centre was opened by President Tomáš Garrigue Masaryk to mark ten years of Czechoslovakia in 1928. The opening exhibition was dedicated to the celebration of contemporary Czechoslovak culture and economy.

Felix was the eldest brother and the day-to-day manager of the factory, with an eye for detail. He was very close to the workers. Walter was the technical director and innovator, and responsible for buying wool. He had a special expertise in judging fleeces, and just by touching cloth would know where the wool had come from. August was the businessman and salesman, the most sociable with good diplomatic skills. Under his influence, the factory exported throughout Europe and increasingly globally. August could think big, Felix think small, and Walter think new. The three brothers formed quite a family team: the diplomacy and business acumen of August, the detailed management of Felix, and the technical brilliance of my grandfather Walter. From Hlinky, they built a family business and an early multinational company. Their business cards showed their global ambition: “Export to all countries. Representatives in all commercial centres in the world.” 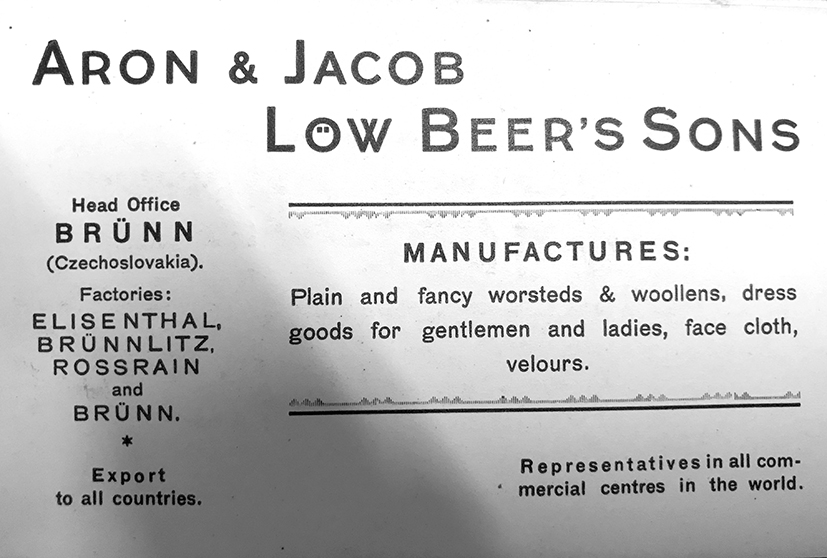 The business card proudly advertising “representatives in all commercial centres in the world”. Photo from The Arks: The Löw-Beer Story Behind Schindler’s List and Villa Tugendhat.

Travel Tip: Visit the Brno Exhibition Centre, one of the most important sites of functionalist architecture in the world. The preparations for constructing the Centre started in the time of Austria-Hungary, but were interrupted by World War I. Once an independent Czechoslovakia was created in 1918, Brno experienced unprecedented development, and the representatives of local industrial and entrepreneurial circles seized the opportunity to hold a major exhibition to celebrate the tenth anniversary of the Czechoslovak Republic. The project won support, the City of Brno bought the land (previously known as “Bauer’s platform”) and announced an architectural competition, which was won by Josef Kalous’s design. His main idea was a monumental entrance area, from which two wide promenades start, lined by the pavilions, which were developed according to Kalous’s concept by other major architects, including Jaroslav Valenta, Jiří Kroha, Bohuslav Fuchs, Vlastislav Chroust, Emil Králík and Bohumír Čermák. The construction started in late 1926, and the exhibition grounds were complete in less than eighteen months (the opening celebration took place on 26 May 1928). The Exhibition of Contemporary Culture in Czechoslovakia, as it was officially called, attracted more than 2,500,000 visitors. Under Nazi occupation, the site was taken over by the German military; due to this, it was heavily damaged at the end of the war, and demolition was proposed. However, restoration works started in 1947. The 1928 buildings as well as some later major structures are listed.