The granddaughter of Jacob Löw-Beer, Johanna, and her husband Jonas Karpeles, one of the head associates from the Aron & Jacob Löw-Beer’s Söhne firm, purchased the property at Hlinky 86 in 1892. This magnificent palace, the design of which has been ascribed to the architect Arthur Brausewetter, dominates the other houses on the street thanks to its distinctive facade. From 1909 the home was occupied by the family of Johanna’s brother, Arnold Löw-Beer. During the 1920s, it was passed to Arnold’s son Walter and his wife the former Alice Stadler, my grandparents. They owned this home until 1939. During the Second World War, it was used by the German SD and SS. 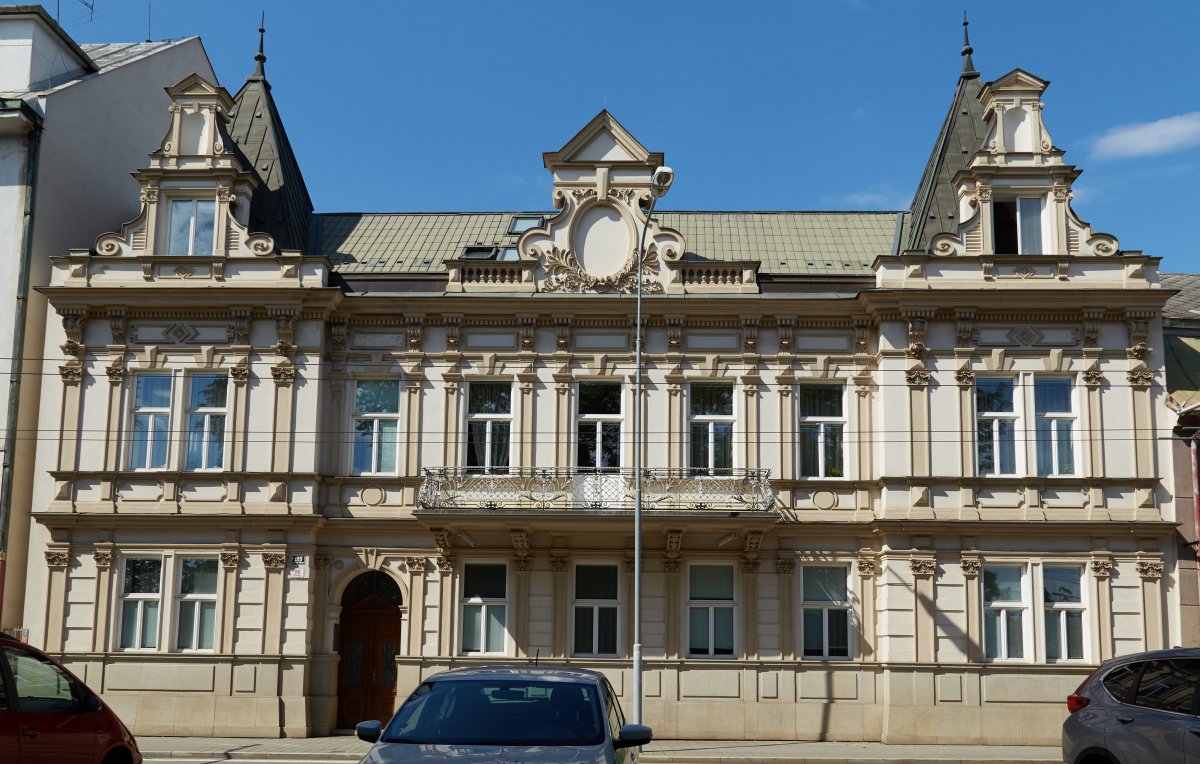 In 1998, I returned with my uncle to the home he had lived in until 1938, his first visit for sixty years. He described to me how the house looked before 1938. He remembers the effortless mix of art and everyday life: “I remember artists coming, like Feuermann the cellist and Kugelmann the violinist – and the great parties. These were given rarely but they were very good parties, arranged by my mother. We children of course weren’t invited … we looked through the cracks in the doors. In the garden there was a huge slope and when there was snow we tobogganed down. How we didn’t break our necks I don’t know because we managed a tremendous speed. In the house there was a large library. My father Walter never worked in the library, but he read there; it was full of books, walls of books. The library went about halfway along the front of the house. Walter would learn a new language each year by reading its literature with a dictionary: French, English, Czech, Spanish, Italian, Japanese; he spoke Latin with some friends. At the top of the stairs, there was a salon that gave lovely views of the garden. There was a huge lime tree, two greenhouses, one even partly heated... The gardener had a little house. He became a Nazi; my father was very tolerant and didn’t feel people should be dismissed for their political views. However, I argued with him often. Mainly about the war against France. I was very pro-French and I argued – a Jew defending the French against Nazis... Several of our employees were very anti-Semitic all right but they never said it aloud, they just criticised the French.”

My uncle Gerry told me how he had escaped Czechoslovakia in 1938. He was always proud of the story of how he tried to join the Czech army aged 14. His parents drove him and his sister Friedl to Prague to send them to school in England. When they arrived in Prague, there were soldiers on the street mobilising to protect a free Czechoslovakia. Czechoslovakia had a strong army and fortress defences. It was a major arms manufacturer and it was understood it could challenge Germany. As the Löw-Beer family passed a group of soldiers, Gerry opened the car door and ran off. He wanted to join the army and defend his country. Gerry had physical power and strength of character. Luckily when he tried to join the army he was asked for his identity and his date of birth. The officer looked him up and down and said, “You are too young; we are strong enough to win without using our 14-year olds.”

As Gerry told me that, his words came alive with a nationalism I didn’t know he had in him: “I was so shocked I was determined not to leave Czechoslovakia.” By this time, my grandparents were driving desperately around the streets of Prague, in circles, asking soldiers if they had seen a lost child, their 14-year-old son. Finally, they drove onto Wenceslas Square and by chance saw Gerry. Through the power of his authority, Walter forced him back into the car. Because of Gerry’s failed attempt to join the Czech army, the family was now late for the train. They decided to chase it in their car to the border. They correctly assumed there would be delays at the border, given the tensions in Czech-German cooperation. As they said many times, better late than never. Walter and Alice put their two children on the train. The family waited till the train was leaving at speed so Gerry could no longer leap out. Gerry would not see his homeland for another sixty years. That sense of uprooting never really left him.

The two children had to cross Germany alone. Gerry remembered the German soldiers walking up and down the carriages, checking their identification papers incessantly. The soldiers particularly focused on Friedl, who was already beautiful and slightly exotic (with her Jewish and Moravian looks that they couldn’t quite place). Gerry told me: “The German soldiers that came on noticed Friedl, who was already developed. They tried to get off with her and chat her up, not realising she was Jewish. She started arguing with them about Hitler and so on. I kicked her as much as I could to shut up.”

“At the border in Aš (Ach), the Gestapo got in and, my God, they really looked like the Gestapo, in that sort of leather coat ... and looked at the passport and then looked at the face ... but we had no difficulty because we had Czech passports. They didn’t recognise us as Jews. If they had, it was at that stage improbable that they would do anything, but they might, they could do anything they liked of course. They really looked like film villains with their hats over their eyes and their collars up.”

Gerry and Friedl managed to get past this real-life film scene, and to school in Scotland. Gerry did not find Britain welcoming to foreigners or Jews. He remembers arriving: “I went to Gordonstoun boarding school in Moray. You know the joke: ‘there’s fog in the English Channel, the continent is isolated’? I hated Britain. In Czechoslovakia foreigners were feted, in Britain they were thought to be inferior, and their ways different and funny. When I arrived at tea everybody passed me cakes, and I thought, that’s nice, but they giggled, and I realised they just wanted to hear me say ‘Zanks’ with my accent, so they could laugh at me.”

We had dinner, Gerry and myself, in a restaurant close to the Hlinky family house in Brno, and we ordered some very good Moravian white wine. As we finished the bottle, I remember thinking I had never seen Gerry look more in place. He always looked a little untidy, out of time and slightly out of place. They said he looked untidy even with no clothes on. Now even his clothes seemed to fit, he had combed his hair smartly to the side, and wore a jacket. He looked tidy, and in place, even in time. There was still part of him that felt that he should have joined the Czech army, and with his compatriots fought and won against the Germans in 1938. In the sparkle in his eyes, I could see the child aged 14, and part of himself that he had left behind sixty years earlier.

My aunt Friedl told me the story of how she got my father Thomas to safety in Britain. My father escaped to France with his nanny but had no passport. In May and June 1940, the Germans attacked France. The speed with which the French army was collapsing was unexpected. Friedl had to act quickly, the last passenger boat for England was leaving. She left her school in England and travelled against the flow of refugees to France. She forged her passport to add my father Thomas, as her son. He was six and she was 17. They managed to get some of the last passenger tickets out of France. Luckily the boat was in a rush to leave, and they were allowed to board. 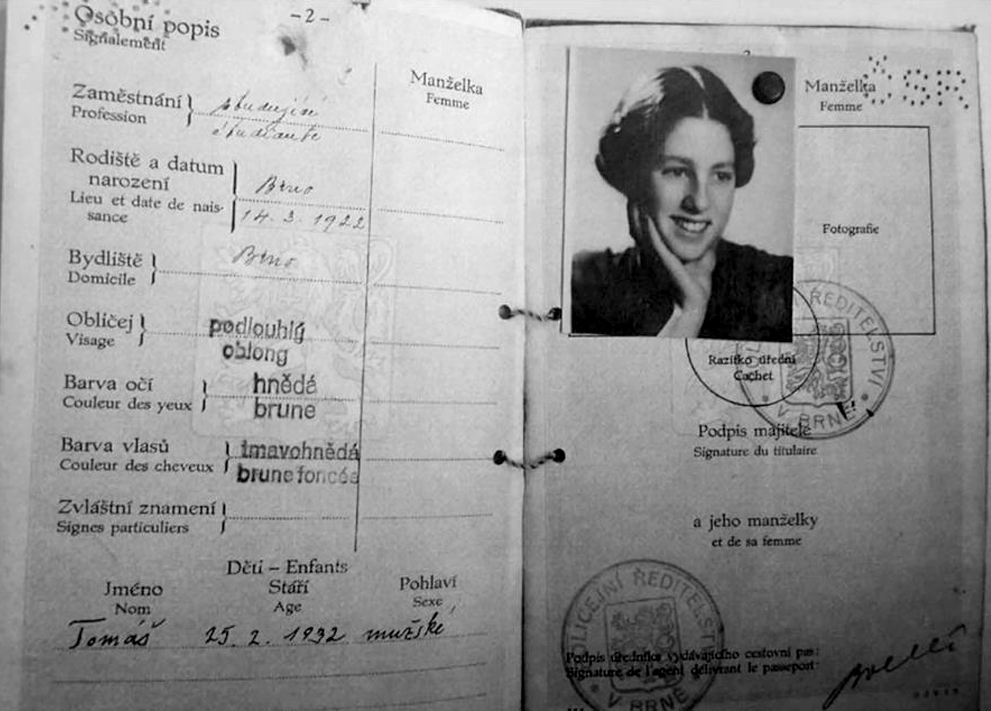 Photo: Friedl Löw-Beer’s passport with the name of her brother Tomas disguised as her son. Photo from passport kept by Saskia Brown, photo Daniel Löw-Beer.

Once on board, however, Friedl was questioned and cross questioned. She held her story, looking the guards in the eye, and using her charm and stubbornness. She repeated that she was expected back at school and could not finish her studies without her son. In these moments, it was probably Friedl’s daring and something of her wild charm and beauty, that got them both out. It also depended on border guards and diplomats willing to break the rules.

My father remembered that as a six-year-old he was really fascinated when some dead bodies were brought on the boat. Friedl distracted him, he said, “like a good mother”. Thomas, my father, went to school with Friedl. He had found a place, as a sole Czech boy in an English girls’ boarding school. My aunt Friedl later told me the funny story of how she brought my father to the school. She was a psychoanalyst and probably processing, what it meant to lose your nationality, your home, and find yourself in a school of the opposite sex. You could also see in her expression a sense of excitement of the war years. She felt that it was one of her life achievements. She got my father to safety.

My father Tom became British but always kept his Czechness. My mother Ann described him: “Tom was so very lively and vivid. He had a vitality and an emotional, Central-European responsiveness. He was never dull, he broke through English properness and also made my world more thoroughly alive.” 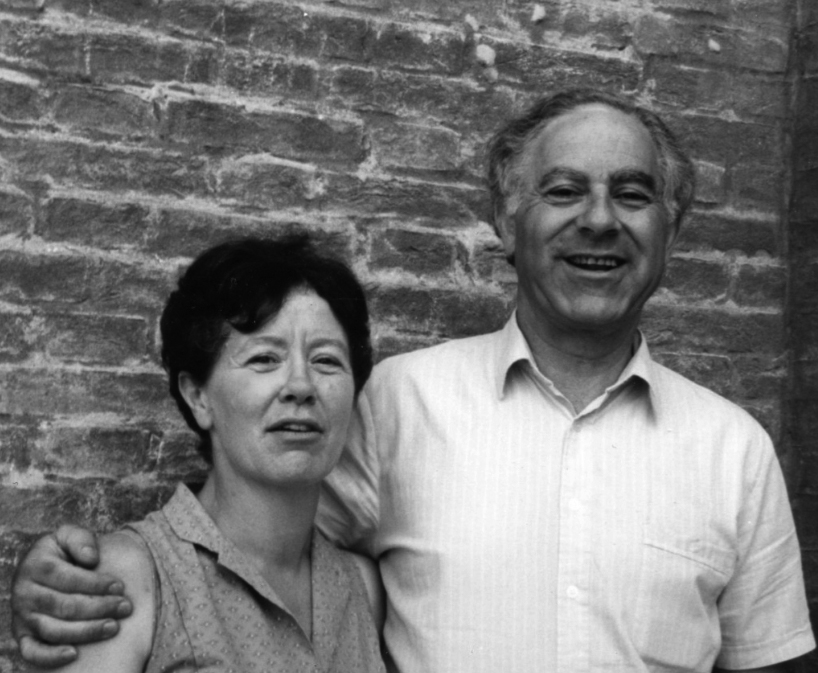 Photo: Daniel’s parents Ann and Tom Löw-Beer. Photo from The Arks: The Löw-Beer Story Behind Schindler’s List and Villa Tugendhat.

Walter, Alice and their children Friedl, Gerry and Thomas settled in England. Friedl became a psychoanalyst in Oxford and contributed the psychological insight to the famous biography of Saint Augustine. Gerry became a psychiatrist, housed many Czech students in his London home, and led the visits which uncovered psychiatric abuses in the Soviet Union. Thomas was a doctor, made several research discoveries in gastroenterology, and with his wife Ann supported medical and musical exchanges between Brno and Birmingham.