The factory and villa of one of the most successful European business families.

The development of textile production at the end of the 18th century in Brno also attracted important European industrialists specializing in this sector. Among them were the Schoellers from Düren in Germany, who established a branch of their business here in 1818 when they bought the Hopf und Bräunlich wool factory in Cejl, They also built a magnificent family home next to it.

However, they did not start their business under the Gebrüder Schoeller brand in Brno alone – the male members of the family founded subsidiaries in different corners of Europe, leading a successful family business across the continent. Soon they became a powerful textile clan, whose members surpassed the other Brno wool entrepreneurs with their capital and their ability to react flexibly to the reversals of the market by setting up sugar factories or steel factories. Gebrüder Schoeller’s Brno branch was extremely successful for more than a century, thanks to the fact that the local Schoellers cultivated numerous cultural and social contacts and often entered high politics. Gustav Phillip Schoeller (1866-1950) who led a renowned art salon together with his wife, a former actress, and Phillip Wilhelm Schoeller (1845-1916), who was also known as an art photographer in Vienna, excelled among the members of this family. Phillip Alois Schoeller (1892-1977), on the other hand, who took over by the family business in 1933, entered Brno’s history infamously – he was an illegal member of the NSDAP already at that time, and during WW2 even gained a number of high political functions in Nazi Germany. With the ending of the war, however, he realised the game was over so fled from the approaching front with his entire extended family to Vienna, where he continued to do business, especially in banking. The Schoellerbank family bank was closed in 1982.

The Brno factory and the villa were ascribed to the republic as a confiscate after the war and now serve another purpose. At the Central Cemetery in Brno, however, you can still find the last resting places of many members of the once-powerful European Schoeller family. 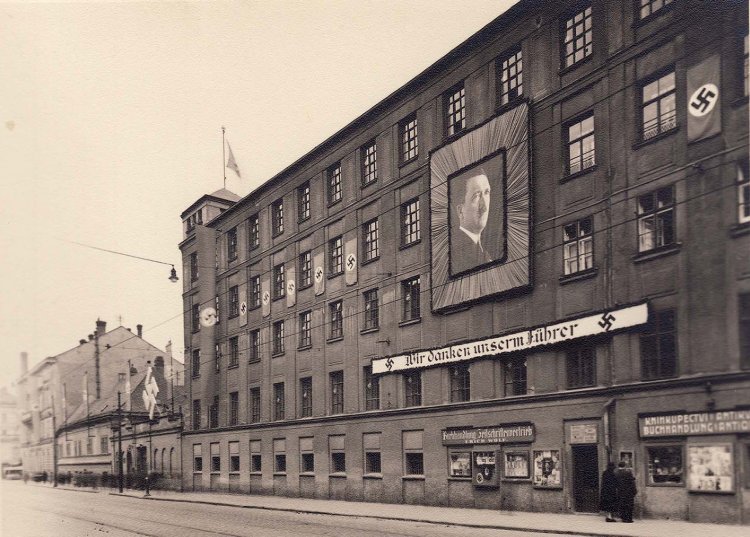 Gebrüder Schoeller factory decorated on the occasion of the formation of the Protectorate, March 1939. Photo © Archiv města Brna
If you continue down Cejl Street to the eighth stop, turn into to Radlas, which is located on your right. Here once stood the largest factory producing combed yarn, Kammgarnspinnerei. The harsh working conditions that prevailed there are described by František Halas sr. in a book called Kemka, which was the factory’s local nickname. Today, only the administrative building at Radlas 5 remains as the plant was destroyed by bombing in 1944 and the subsequent great fire. 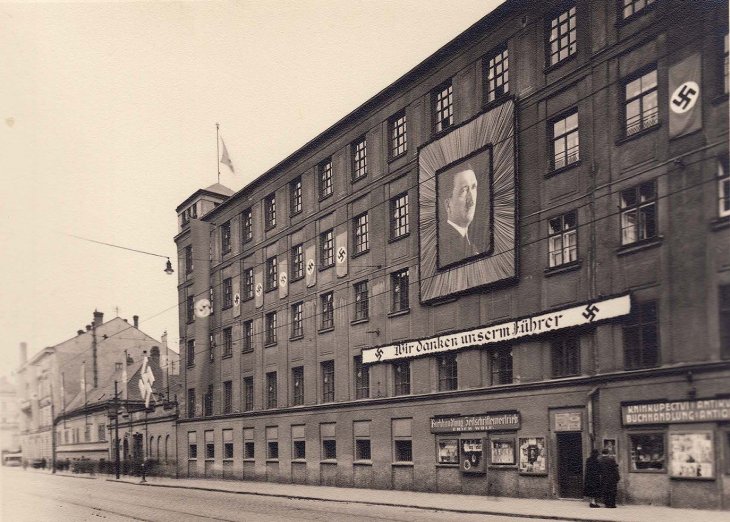